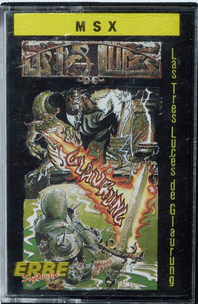 Dedicated to the memory of Javier Cano, TOPO Soft developer

Las Tres Luces de Glaurung (a.k.a. Conquestador) was a legendary 8-bit computer game created by TOPO Soft in the called Golden Era of spanish software, when Spain became the second largest 8 bit computer entertainment software producer in Europe, only behind the United Kingdom.

Today you will be able to play the remake made by masoftware guys and ported to the Raspberry Pi by myself.

It was probably one of the first MSX titles I had. It is one of those games that are desperate difficult at first until you become the character control. The good thing is that you can save games.

The object of the game is to find the Three Lights and leave the castle. These three jewels, like the rest of usable objects are stored in chests scattered around the map. But these boxes can also contain harmful things, so that we will be very careful. Probably at least one or two gems will be in the lower regions, where the danger is greater, but this is not certain. In any case, once we must turn to the right side of the castle where the exit door, taking care to carry, also is the key that opens this door, in which case we will have completed the adventure.

To play, you need to unzip the file you'll find at the end of this post and install Allegro libraries:

Now start the graphic server with startx, open a Terminal and cd the Glaurung directory. To play just run: ./glaurung