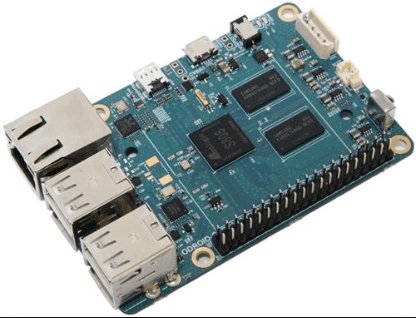 I don't comment usually anything regarding Raspberry PI direct competitors, but this has especially caught my attention due their price: $35. Want to know why I bought one?...

The news comes from cnx-software.com. Amlogic S805 released the SDK for Android and buildroot for Linux with support for GPU and VPU (Video Processing Unit). The good thing is that ODROID has a good community and care about their product.

Not fair to compare it with the Raspberry Pi. It's seems a widespread effort to end the reign of the PI. I equate more to the Cubietruck with respect to performance and features. Banana Pi has good things and every day come out new distros and awesome projects from the community, but fails to support the GPU and although you can already test their abilities to play a 1080p video smoothly, it is not something you get out of the box.

It is also true that you start ordering and finally, among shipping and accessories, you have to pay around 54 Euros ($67), but is not bad price for what you get.

I see they have removed the analog jacks for audio/video and has no SATA port, although there is adapters for both technologies. 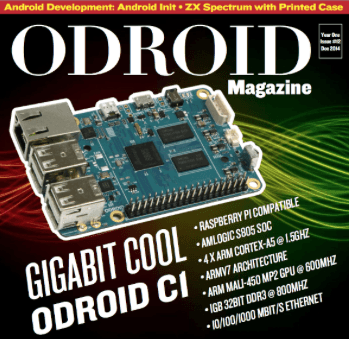 As you have watched, the connectors to "speak" with the real world are like the Pi, so you have the same possibilities except the disparity in some GPIO port pins. About the compatibility of accessories (Pi-Camera for example), I have not read anything about it, but now has on sale 9" screens and LCD 16x2.

Video playback through Android or Ubuntu reach 1080p due to the hardware decompression H.264/VC1/MPEG4/MPEG2 supports (No need to buy separate license such as the Raspberry Pi) . It is also expected to be compatible with the new format H.265 soon.

To web browser as I have seen in the video that accompanies the article, it behaves with Chromium but we have to test it and avoid drawing wrong conclusions.

For games, a new world of possibilities opens to have the perfect combo CPU/RAM/GPU. In the forums I have seen for ODROID in general that you can run games smoothly as Doom 3, PSP or Nintendo 64 emulators (Sorry, Raspbians), and... Wow!, finally a decent karaoke game to bother the cats in your neighborhood.

If you prefer Android, you have at your disposal a 4.4.2 rooted version for development and you can install the Google Play easily.

Perhaps we are becoming very exigent, not because we are satisfied with having a decent desktop and some applications running. We want to see how to reach the best from our mini computers and every time, companies released new boards to the market with better performance because manufacturers know that.

It is too soon (it's in diapers) to have a community or interesting projects. We have to hold their hand and teach to take their first steps.

My recommendation is that if you have a Raspberry Pi and what you like is "tinkering", continues as you are and passes all these new "Killer-PI" boards, although it is true that something stagnant has been with respect to hardware.

If you want Ubuntu or Android with XBMC that just works with all kinds of applications, games or surf the web connected from the TV in your living room, put a blindfold and buy the ODROID-C1 this Christmas (I ALREADY have one).