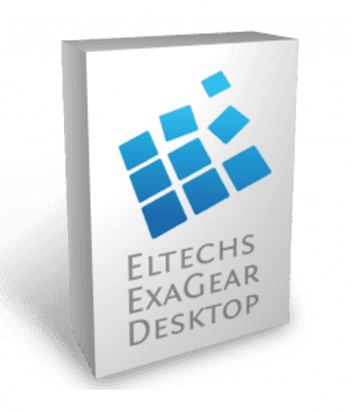 Would you like to install some x86 Linux apps on your favorite board?. Surely you've heard about Exagear Desktop, a payment software that allows you to launch applications based on x86 (32-bit). Maybe you have doubts about if it really works.

The company Eltechs has contacted to me to make a review about their product. 5-10% is difference between ExaGear v1.0 and v1.1. I know only one similar solution - Qemu. Performance comparing to Qemu is 5x (500%)!

Are you interested or curious about how it works?. I've seen comparisons and graphics in several sites about their performance, but nowhere have made real test running software. I bring the first analysis about this product and we'll see in the following two articles if it really worth. In addition, we are giving away 10 free licenses of Exagear Desktop.

This solution implement a virtual machine (VM). It's a container for x86 applications inside a board with ARM processor. That is, you have a host computer (PI, ODROID, etc.), an a guest (x86 VM).

This product takes nearly a year on the market, and it is compatible with the Raspberry Pi 2. Now it brings support also for Raspberry Pi A/B/B+, and have gained support to other boards like ODROID, Banana Pi, CubieBoard or any with ARMv7 processor, as mentioned before.

The requirements what you need: 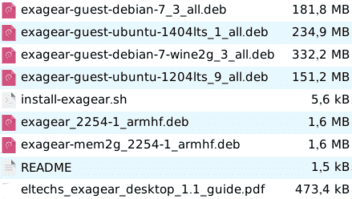 In my case, I have several packages: Raspberry Pi, Raspberry Pi 2 and for ARMv7 processors. As you can see, it will install a virtual image adapted to the operating system that you have installed. That is, if your operating system is Raspbian, the installer will use an x86 Raspbian image as a guest.

There are two installation methods:

Installer on Raspbian with a Raspberry Pi 2 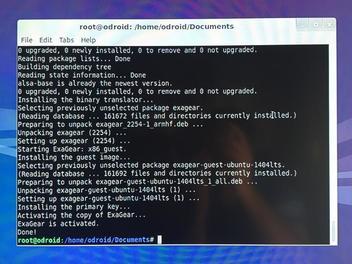 Ready!. Application is installed together with the packages needed to run everything correctly. The image what really does is expand in the directory /opt/exagear/images/\, the guest system. So, once we are inside the virtual machine, you will really work in that directory (similar to chroot command).

To ensure that the image that we installed is Ok, we can use command-ls. If you have a ODROID board, it shows you:

To access the guest system, you must type exagear:

Eureka, you have your own x86 VM running!. It was very easy to get here. To return to our guest operating system, type exit

One detail to note is that users share the guest machine to the host computer. That is, within the VM, have the same users and the same folder /home that in your main operating system.

You have arrived at the end of the first part of this review. If you like to try this software, Eltechs has been kind enough to give 10 free Exagear Desktop licenses for readers of this blog. The rules are simple: