With the arrival of Windows 10 on your desktop, we had almost forgotten the leap it has made in a few months in the world of development boards. Not what we expected, because having Windows desktop in our beloved Raspberrys is elusive dream, but we must not underestimate the great work they are doing with Windows 10 IoT Core, which today will reflect a little. 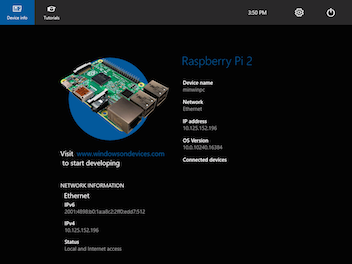 As much to say that its Core has been released, it is still a beta and still take to get a stable version from the official website of Windows > IoT can be seen the projects being developed for the Internet of things: Weather Stations, robot kits, accelerometers...

What is interesting, firstly fusion hardware we all know, with development environments that have accompanied us throughout life as Visual Studio. They give us everything so you can develop an ecosystem that just works.

In this post I will collect interesting articles to use Windows Core. I recommend that all of this technology not lose sight, because the future as I see, is wearable devices, and especially the IoT that fortunately you know what means, and most people walking watching a screen in their hands, not yet.

Link: ms-iot.github.io > Learn how to set up the Raspberry Pi 2 and connect it to your computer