One of the passions (frustrated) I have since childhood, is the creation of video games. You can read an article here I wrote a while.

I have tested several engines looking for maximum portability to all platforms. SDL has always been the best choice, but I have little more than a year watching the progress of a game engine called Godot Engine that has nothing to envy to Unity or Game Maker, and it works. The best, the user x1212 is porting the engine to the Raspberry Pi with surprising results (See the video below)...

In the video you can see above, it is admirable to see the speed when running 2D games. It is also not so bad in 3D, but presumably it will improve. Think that is not easy to run in a X window content directly from the GPU.

Forgive my enthusiasm, but since it went public this engine, I have dreamed that I could run on the Raspberry Pi. It allows import from Blender your models and has a whole environment to create your own video games with a programming language adapted called GDScript. With a community on Facebook where you can chat with the developers and other developers. In this thread you can see the progress being made to our beloved Pi. 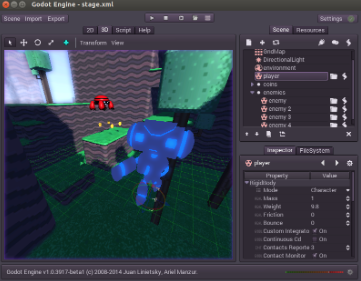 I leave the executable for Raspbian compiled by the guy who made the video. From here I give to this user my congratulations and I hope that in the future, this engine have official support from OKAM Studio.