My opinion about Raspberry Pi 4 - 8 GB: the new "Desktop replacement" 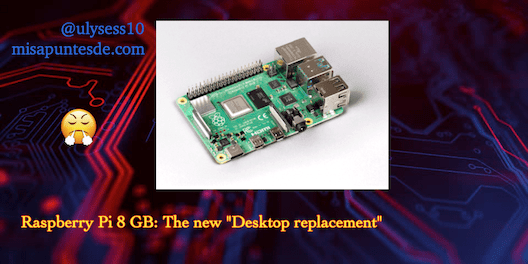 Last week an update of the Raspberry Pi appeared as if nothing had happened. With its defenders and detractors, I'm not going to make an analysis or comment on the characteristics of this board, but I'd like to give my opinion on what is happening with the Raspberry Pi Foundation.

I begin by talking about the price. It would be great if today we could find a "desktop replacement" for less than 50 Eurodollars on a board we could use without any problem, but I have the feeling that in the end, we all still use our Macs and PCs after 8 years that we knew about RasPi. Why then do we still try to look for this denomination in a SBC?

Maybe my concept of a computer that can replace my day-to-day equipment is different from yours. My daughter is currently using Tinkercad on the Raspberry Pi 4 GB with no problem and can watch YouTube videos or do her homework with LibreOffice. Even with the 3B+ or 2 GB version she has plenty of it. Maybe those of us who have had a Pi for a long time are the future buyers of a version to which every year we demand more and better, but watch out, for the same price.

So who's gonna use this board? Well, I've only read it in a couple of places, but at the end it comes out some person who says it will improve efficiency in server farm, Docker containers and thus save a bunch of Eurodollars. Here you have to think about different approaches. The average cost of a Raspberry Pi with 4 GB is $45 in the World, and the new one with 8 GB is $75 ($30 more than the one with 4 Gb). That is, if we buy TWO Raspberry PIs with 4 GB we would pay $90 for having 8 GB and 8 cores instead of 4 for a server farm. For energy efficiency costs yes, but you will hardly notice that. It's still a very good option (although not the best) in terms of consumption, but in this type of configuration if what we are looking for is power, I would still bet on mounting 2 PIs of 4 GB. 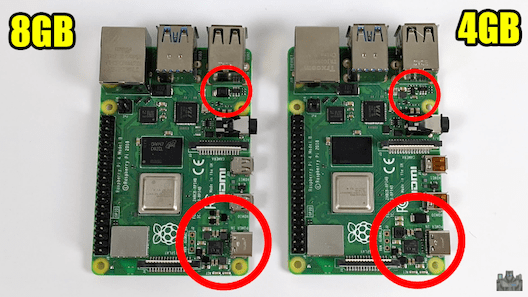 Some corrections between the last two SBC

Was this update with 8 GB necessary? NO and YES. We didn't need an 8GB version. The YES because they wanted to "hide the bugs" they had from manufacturing. Complaints (and returns) about the power adapter are constants and I haven't read anything yet about whether the bug that only the Raspberry Pi 4 has with some resolutions has been fixed and that I have been suffering/following up on this Github issue for almost a year. Now I understand about the release of a recordable eeprom: we released a product with errors but we will fix it in the future. That's what it's been good for to get a new Raspberry Pi, don't be fooled.

Raspberry Pi 8GB Review - Should you upgrade? - Definitely not.

We'll see many YouTubers/blogs/forums compiling video editing applications, teaching and recommending what you can do with this RPi like a PRO to get more followers/patreons/advertising, but I'm sure when they're done, The RasPi will go back to the drawer and they continue with their desktop equipment.

What about the graphic drivers?. They say that Vulkan will have support within a month. Few advances have been made in this area and I know developers who are limited due to not taking advantage of the capabilities of the GPU due to lack of information from the graphics chip it have. That reminds me that I don't know how long I have been waiting for an operating system with Wayland by default.

So What do you want us to do?. Tell me "Eben" with his arms crossed. And I say, "Seriously, fix your damn software". I understand that you don't sell operating systems or programs and those "fixes" don't mean a financial gain for you, but the user that has gone through almost every model of Raspberry PIs and those that use the board intensively, still has a lot of issues of this kind. Why do you release a new 8 GB board if you don't support a decent Operating System?. You release an Alpha Raspbian (sorry, now Raspberry Pi OS) with a mix of 64/32 bits kernels, 32 bits software and you can't think of anything else but to say that you better choose Ubuntu or others that are 64 bits ready.

This is not a desktop replacement ,so I don't want an 8GB Raspberry Pi. I'll buy a new Raspberry Pi when it's revolutionary. I don't expect them to mount the new ARMS (check out the next article via techradar.com), but I'll bet for the board that brings it.